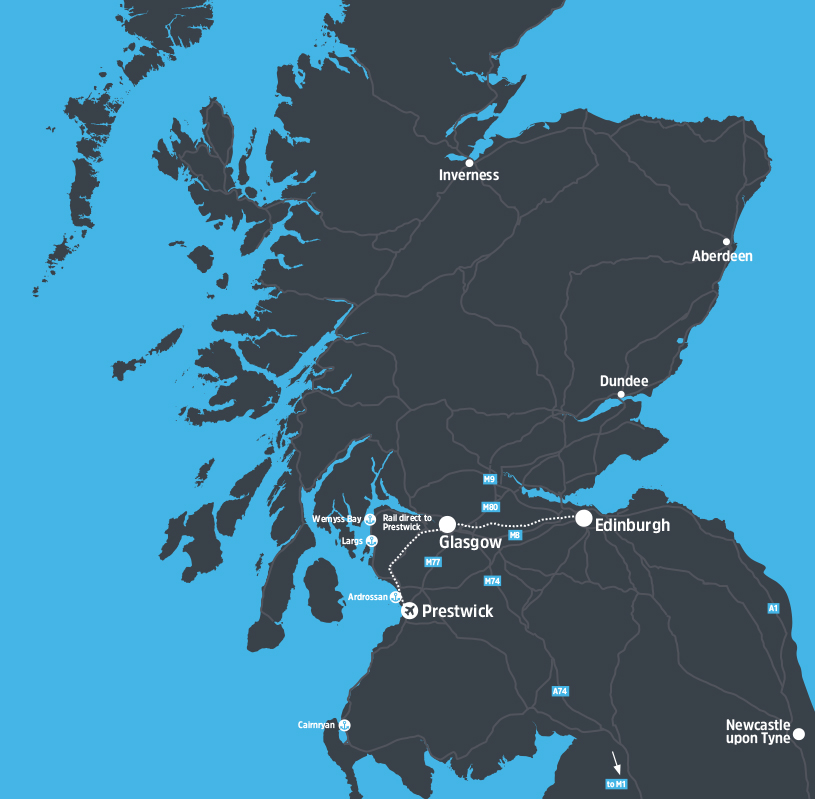 Glasgow Prestwick has the best surface transport links of any Scottish airport.

Glasgow Prestwick Airport connects with the UK motorway network via the A77 on to the M77.

Using this motorway, you can be in Glasgow in 40 minutes and in the countries capital city – Edinburgh – in just over 1 hour and 30 minutes.

Glasgow Prestwick is the only airport in Scotland with its own railway station and it is one of only three airports outside of London with a direct railway connection.

The railway station, which is owned and operated by the airport, is accessed via a covered overpass accessed from within the terminal building.

The station has two platforms with trains going south towards the town of Ayr and north towards Glasgow and onward to Edinburgh.

Trains run in both directions every 15 minutes at peak times to Glasgow & beyond.

The journey time to Glasgow by train is approximately 45 minutes and around 2 hours to Edinburgh.

Free rail travel is available to passengers to/from anywhere in Scotland for the first six months of any new scheduled route.

After the first six months of any new route, passengers benefit from half price rail travel across Scotland with a valid boarding pass.

The airport is serviced by a number of commercial services that operate along the A79.

This includes the X77 service linking Ayr and Glasgow which operates between the hours of 06:25 and 22:40 and runs every 30 minutes Monday to Saturday and hourly on a Sunday. The journey time is approximately 50 Minutes.

The airport is ideally located for connections onward to the Kintyre Peninsula, the west coast islands and  Northern Ireland with a number of ferry ports within 1 hour 30 minutes’ drive.