Prestwick and Houston Spaceport signed a Memorandum of Understanding (MOU) in 2016, to allow both organisations to share relevant policies, processes, and other information related to commercial spaceport licensing and operations.

The discussions between Dr Whitford and Prof Alexander arrive at an exciting time for Prestwick Spaceport, which has recently secured a partnership with launch provider Astraius in a deal that will boost momentum for the Scottish and UK space industries. It also follows a recent initiative organised by Prof Alexander, who is director of the Space Institute at Rice University in Texas, which connected schools from Scotland, Ecuador and Texas, with the International Space Station (ISS), where they were able to ask questions directly to astronauts in space. Dr Whitford supported the out of this world educational outreach initiative aimed at inspiring young people, having arranged the participation of Prestwick Academy. 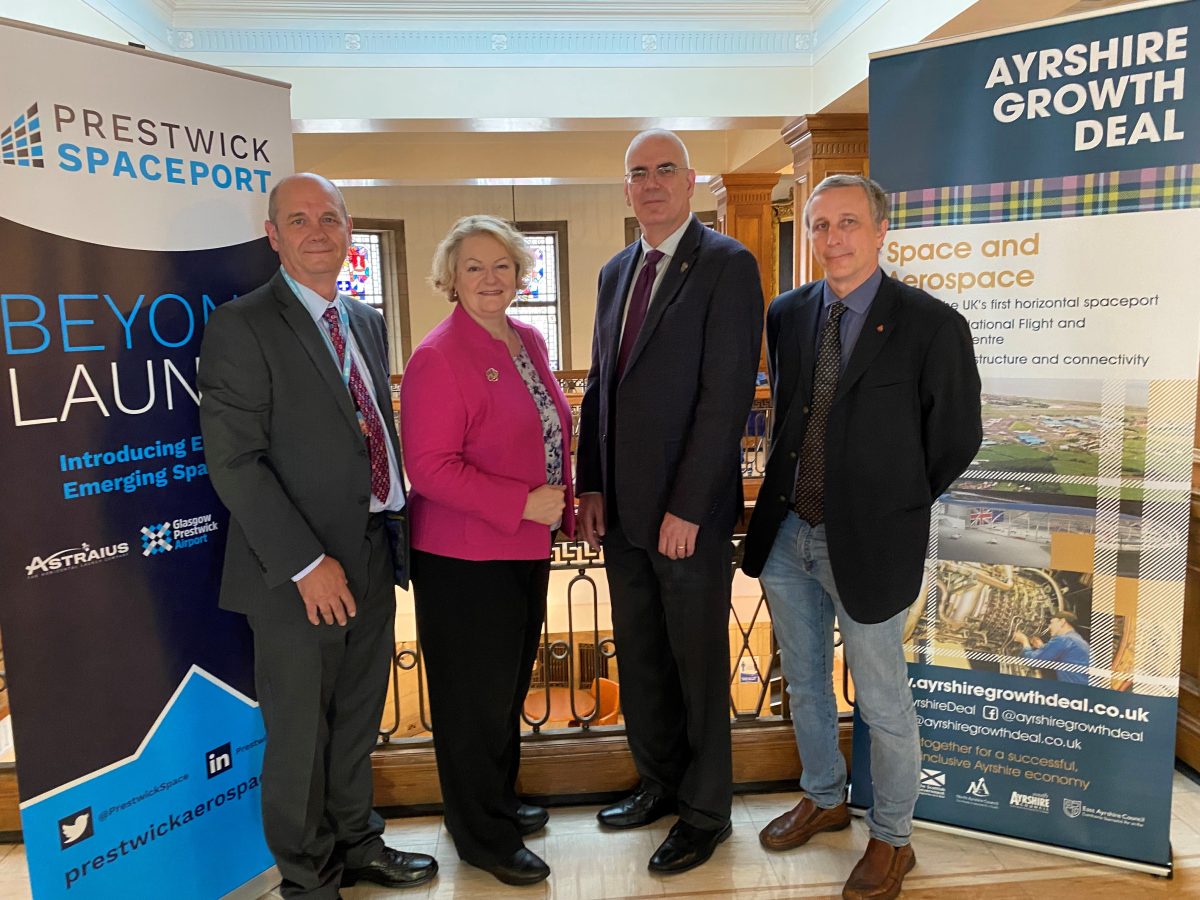 Dr. Whitford MP said, “After an exciting week for Prestwick Spaceport, it was great to welcome David Alexander back to Ayrshire to discuss the relationship between Prestwick and Houston Spaceports. As a Global Scot from Glasgow, he has always been keen to strengthen the ties between Ayrshire and Houston, in both the Space industry and promotion of STEM education and I was delighted to be able to facilitate the involvement of Prestwick Academy in his recent educational session with the International Space Station.”

Prestwick Spaceport, which is represented by Glasgow Prestwick Airport and South Ayrshire Council, is set to become the flagship of a proposition that extends far beyond launch, working towards creating a wealth of career opportunities and bolstering the already long-established aerospace cluster in the region. The Spaceport’s long runway, ideal climate for take off and exceptional connectivity via air, rail, sea and road make it an ideal location to host Europe’s most exciting, emerging space hub.

Theo Leijser stated, “Prestwick Aerospace, Scotland’s largest aerospace hub, secured £80million of investment from the wider £250 million Ayrshire Growth Deal funding. In addition to infrastructure for the spaceport and commercial build, part of this investment will be used to establish an Aerospace and Space Technology Application Centre to nurture and develop the STEM skills needed to keep the UK at the forefront of what is a globally growing industry for years to come. It was great to have the opportunity to meet with David Alexander, share our plans and strengthen our collaboration.”

Scotland’s space sector is already developing at a rapid pace, and Prestwick’s recent partnership with Astraius, in combination with the recent talks with Houston Spaceport, are set to further fuel the ambitions of the sector. In recent days Glasgow was host to an event organised by the international society for optics and photonics, SPIE, on Space, Satellites and Sustainability, which brought together academia and companies from across the sector to explore opportunities for collaboration on the use of downstream space data for environmental purposes. Professor Alexander was a co-author on paper that was presented at the conference.

On his visit, Professor Alexander said, “The ongoing developments at the Houston Spaceport and the exciting activities at Prestwick make for a natural partnership. We are excited by the growing space connections between Houston and Scotland.”

One week ago the UK government published its first National Space Strategy, with the document setting out the UK’s long-term plans to strengthen its status as a world-class space nation. The strategy is set to empower businesses, including Prestwick Spaceport and their partner Astraius, to thrive in the sector.

CEO of Astraius, Kevin Seymour, welcomed the strategy by reflecting back on his company’s partnership with Prestwick stating, “We are immensely proud of our part in the landmark deal for the development of Prestwick Spaceport, between South Ayrshire Council, Glasgow Prestwick Airport and our UK launch company Astraius. Our joint plans fit exactly into the very First part of the Government’s Ten Point Plan, ‘to capture the European market in commercial small satellite launch with the aim of becoming the leading provider of commercial small satellite launch in Europe by 2030.’”