22nd Sept 2021, South Ayrshire, UK – Glasgow Prestwick Airport has secured a launch partner for its spaceport development in a landmark deal that will boost Scotland’s space industry ambitions and create an important strategic asset for the UK.

The airport, together with its partner South Ayrshire Council, yesterday signed a Memorandum of Understanding (MoU) with Astraius, the leading UK based, commercially operated horizontal ‘air launch’ company.

The agreement brings together proven horizontal launch technology – which allows the release of a rocket carrying small satellites from high altitude – with a world class spaceport development, in response to a growing demand from customers. The global satellite market is booming, with operators of technology no larger than a shoebox looking to access “Low Earth Orbit” (LEO) to carry out activities that include monitoring climate change, tracking deforestation and identifying illegal fishing or mining activities around the globe. 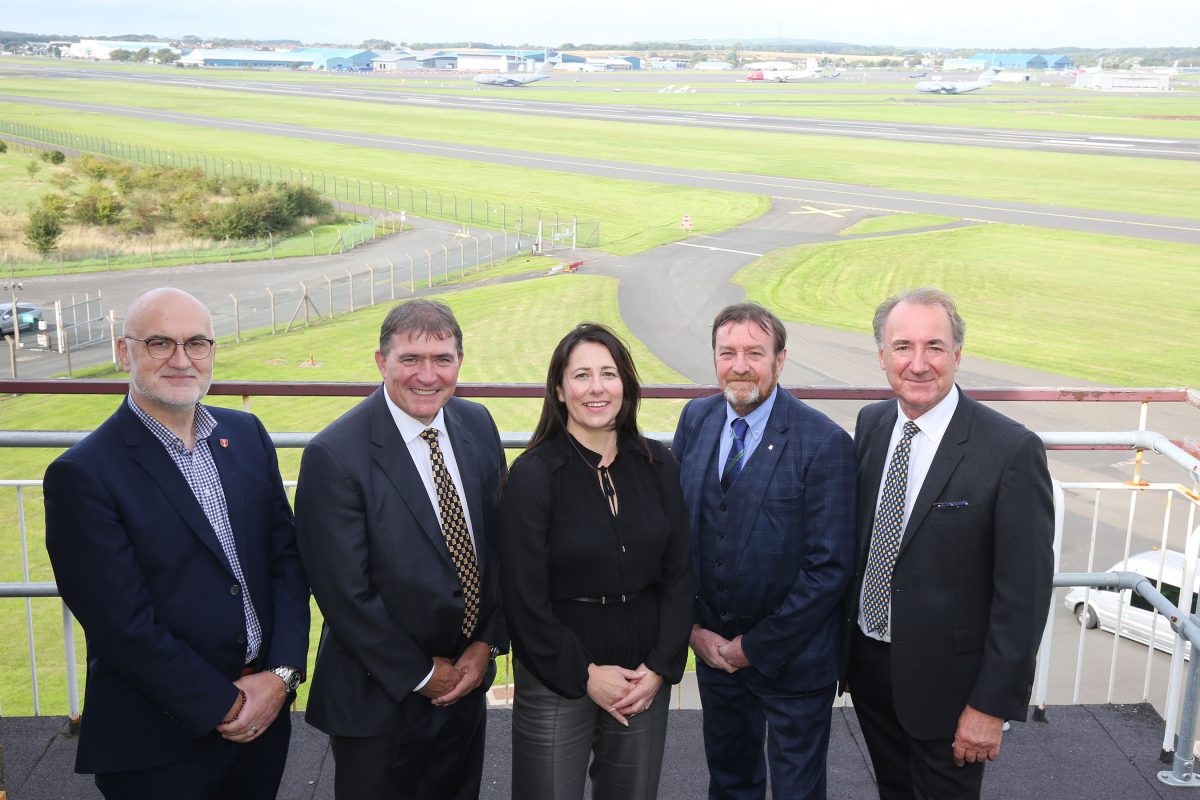 Yesterday’s announcement will substantially bolster Scotland’s space industry ambitions. Glasgow already manufactures more small satellites than anywhere in the world outside of California, while Edinburgh has positioned itself as the space data capital of Europe, leading on the analysis of space derived data to bring a range of benefits to a variety of business sectors, the environment and wider society.

The design, infrastructure and launch capabilities at Prestwick Spaceport also represent an important strategic asset for the UK. Prestwick has particularly strong transport links, a more than favourable climate for regular launches and a strong heritage of innovation and engineering expertise. The spaceport forms a key part of a growing ecosystem of companies and talent that will act as a catalyst to stimulate economic activity around space, boosted by multi-million pound Ayrshire Growth Deal funding.

The MoU was warmly welcomed by the UK Space Agency, as well as both wider UK and Scottish Government representatives. Scotland’s Minister for Business, Trade, Tourism and Enterprise Ivan McKee stated, “The Memorandum of Understanding with Astraius as a launch partner is great news for the Prestwick Spaceport and signifies a major step towards bringing horizontal launch capability to Scotland.

“Our ambition is for Scotland to be Europe’s leading space nation and to have a £4 billion share of the global space market by 2030, whilst developing launch capability – both vertical and horizontal – to serve small satellite producers. The announcement today brings us a step closer to achieving our ambition and proves once again the versatility and dynamism of the Scottish space sector.”

“In Astraius we have identified a partner with the vision, expertise, and proven technology to help fast-track our ambition to become Europe’s premier launch location, offering spaceflight as part of a proposition that stretches beyond launch, bringing a wide range of space related benefits to the region.

“This is both commercially exciting for the flagship element of Prestwick’s established aerospace hub and an important strategic step in developing launch capability for the UK. Partnering with the right service provider is critical for any launch location and Astraius is best suited to provide the required impetus and momentum to this exciting endeavour.”

Astraius Chairman, Sir George Zambellas, explained: “A revolution in space exploration and technology is underway. Satellites are transforming communication, knowledge sharing and helping to monitor the environment, whilst powering the global economy. Astraius exists to provide a dependable, affordable and agile means of launching the world’s next generation of small satellites. In joining with Prestwick Spaceport, we now have the partner that will allow us to make this vision a reality.”

Astraius CEO, Kevin Seymour, said: “This landmark agreement is both strategically and commercially significant. In partnering with Prestwick, we will be able to deliver on our promise to the many satellite customers looking for launch certainty. This is an important milestone for both Astraius and Prestwick Spaceport and will add to the development of a vibrant space sector for Scotland and the UK.”

South Ayrshire Council is a key partner in the development of Prestwick Spaceport, having secured £80m of investment for the existing Prestwick Aerospace hub – Scotland’s largest – as part of the wider £250m Ayrshire Growth Deal funding. The £80m funding will be invested in infrastructure and is expected to create up to 4,000 new high-quality jobs.

Cllr Peter Henderson, Leader of South Ayrshire Council, said: “Prestwick Spaceport will have a hugely positive impact on local communities in South Ayrshire. Bringing a wide range of skilled jobs and a vibrant supply chain to the local area, the spaceport not only offers significant economic benefits, but will create opportunities for young people to have exciting careers.

“The spaceport, like all other Ayrshire Growth Deal projects such as a new Aerospace and Space Innovation Centre at Prestwick, will be delivered on Community Wealth Building principles. Based on inclusive growth, this will ensure that local people are given the chance to develop skills so they can participate in the future economy. The signing of this MoU today is not only a significant step for the development of Prestwick Spaceport, but for the future communities of South Ayrshire.”

The Ayrshire Growth Deal is a partnership being driven forward by the Scottish Government, the UK Government and East, North and South Ayrshire Councils. The Deal was signed in November 2020, securing £251.5 million investment to realise Ayrshire’s potential and become a world-class business region for the aerospace and space, energy, marine, manufacturing and tourism industries. This investment is expected to unlock private investment of around £300 million and deliver around 7,000 new jobs across a wide range of sectors, transforming the local economy.

UK Government Minister for Scotland, Iain Stewart said, “This is a giant leap for Prestwick and the UK to delivering a horizontal launch spaceport and boosting our growing space industries.

“Through the Ayrshire Growth Deal the UK Government is investing £32 million in the aerospace and space programme, which is bringing new jobs and businesses to the area. Across Scotland we are investing more than £1.5 billion in region deals, helping communities to build back better from the pandemic.”