Glasgow Prestwick Airport is the only airport in Scotland to have its own rail station.

With over 100 trains stopping at our station each and every day, and half price rail travel from anywhere in Scotland, more and more of our air passengers are choosing to take advantage of the ease and cost savings offered by using or rail link to arrive and depart from the airport.

Designed by government, police and the rail industry, a UK-wide campaign seeks to help build a more vigilant network on railways across the country and raise awareness of the vital role the public can play in keeping themselves and others safe.

“Here, at Glasgow Prestwick Airport, safety is our number one priority and we are proud to be part of the government’s nationwide campaign aimed at encouraging train passengers and station visitors to report any unusual items or activity.”

“To help raise awareness of the campaign, passengers arriving at our rail station will notice ‘See It. Say It. Sorted’ posters and our on-line followers will see regular posts promoting campaign messages urging rail users to report anything unusual either in person to rail staff, or by texting 61016 or calling 0800 40 50 40.”

This campaign is initially focused on users of the rail network, but the airport plans to introduce similar messaging targeting customers and staff within the airport. 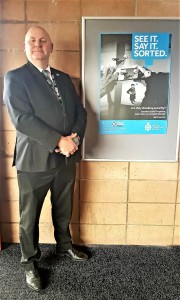 “As part of the airport’s ongoing commitment to the safety and security of all our passengers, concessionaires and fellow colleagues, we are working with the Department for Transport, British Transport Police, Police Scotland, Network Rail and ScotRail to help keep the UK’s rail network safe by promoting the ‘See it. Say it. Sorted’ campaign. Our rail station visitors and on-line followers will regularly see these safety messages and as we widen the campaign beyond our rail station and into the airport, we’ll introduce similar messaging through posters and public announcements across the whole site.

“The UK boasts one of best safety records for both air and rail travel. By supporting this campaign and working with colleagues from partner agencies alongside the travelling public, we can all work together to ensure that this remains the case.

“Our message is that we urge people using the rail station and the airport to report any security concerns they may have to a member of rail staff, airport staff or to the police. Your safety remains our number one priority.”

To find out more about the campaign, please visit: